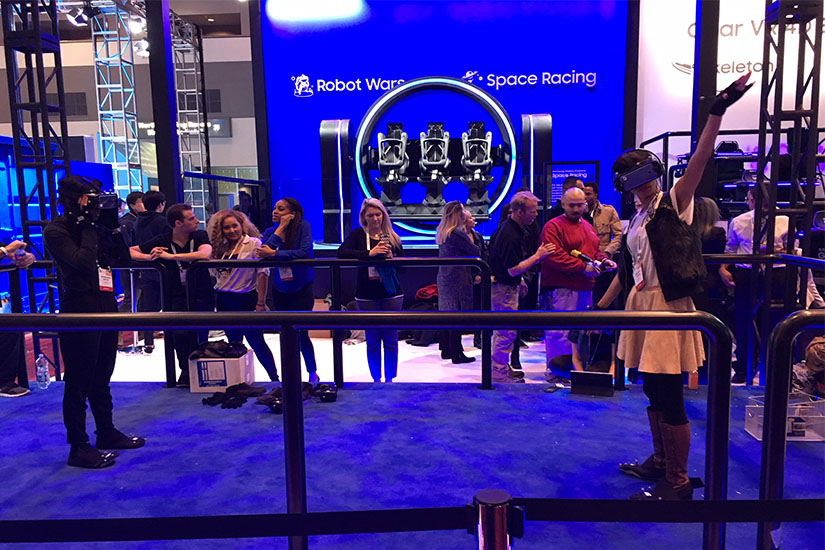 Closing in on the second day of CES pre-show, and the future direction for innovation is starting to take shape. Keeping in mind that 20% of the exhibitors did not exist three years ago, the startups along with the large global conglomerates like LG, Bosch and Panasonic want to change the way we work, live and communicate by infusing artificial intelligence into our personal lives and businesses. The concept of a graphical user interface is disappearing as we move into the age of voice control due to the Word Error Rated (WER) of voice control products like Alexa has reached 6%, a margin that equals human interaction.

Meanwhile, the multitude of interconnected devices and IoT is leading to fewer individual interfaces and instead served up through a central command device that takes care of the interchange on our behalf. These hubs on display by LG and Bosh are looking a lot like robots, that driver around on wheels too. As voice integration surges these hub devices become key to deployment of vocal computing throughout a space, ushering in what Dr. Dubervak from the Consumer Technology Association is calling the era of faceless computing.

Take the next generation of a consumer appliance like the Smart Home LG refrigerator as an example. Intelligence is being defined as the ability to adjust internal processes, like the cooling system based upon changes in the environment such as the temperature of the room. This concept of nuances, constant monitoring, evaluating, and making adjustments on our behalf is going to proliferate the consumer technology industry and no doubt extend into the corporate workplace.

Similarly, we are seeing a sea change in the way manufacturers, clients and government entities are interacting. Historically, vendors wanted to keep everyone on their platform, but this appears to shifting to providing a broader set of options, as exemplified by the many Amazon Alexa partnerships. These manufactures are anticipating that consumers will be most happy when they are living a life where washing machines order detergent automatically, and to achieve this paradise devices have to more closely monitor human behavior and interact with external services provider.

We may want to live in a smarter home, city, community, but consider that many of these companies also have contracts with government security agencies, and thus the potential conflict rises between offering a convenience in exchange for even greater personal data. So long as perceived value of artificial intelligence remains high, then the concern over how our personal data gets used remains overlooked. Thus in 2017 we will begin to measure the value of the artificial intelligence by when the platform that provides fluid interaction (voice control), useful recommendations, the ability to make subtle adjustments to our preferences and ultimately delivers a significant benefit to our behaviors that remains useful over time.

Hyundai’s announced partnership with Cisco is an example of manufacturers recognizing the need to deliver robust security and policy management in this new age of cloud-connected devices. Security is becoming increasing important as the depth of human interaction increases. For example, in Hyundai’s next generation vehicles, interior sensors will monitor C02 levels and respond by increasing oxygen. The car also monitors the driver’s heartrate. If agitated, the car responds by providing a more calming environment, and when it senses a tired driver, the car lowers the temperature and adjusts the seat for better posture. These significant features start encroach on human choice, which is technically the point since, per manufactures and government agencies are agreeing that most motor vehicle accidents occur by drivers making the wrong choices. 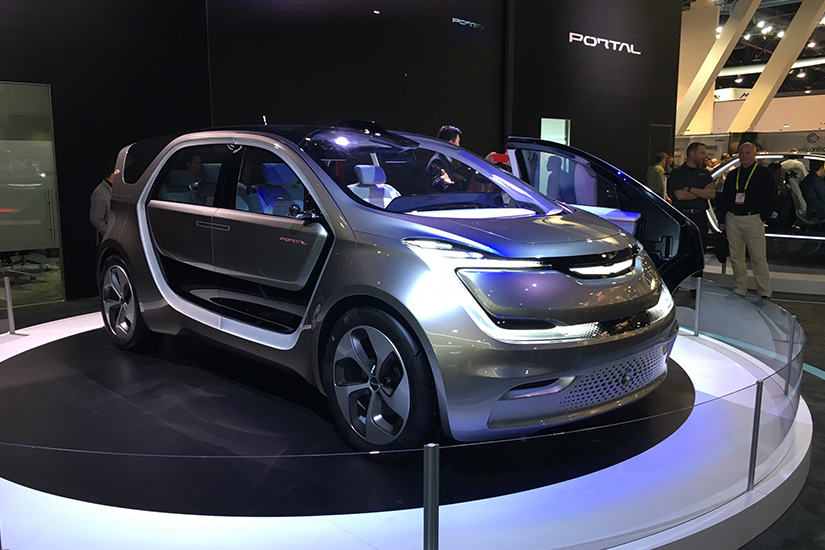 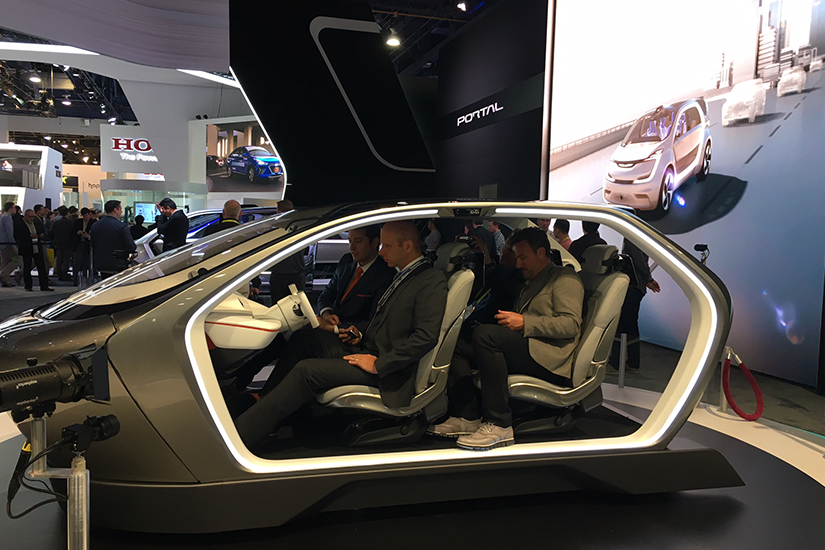 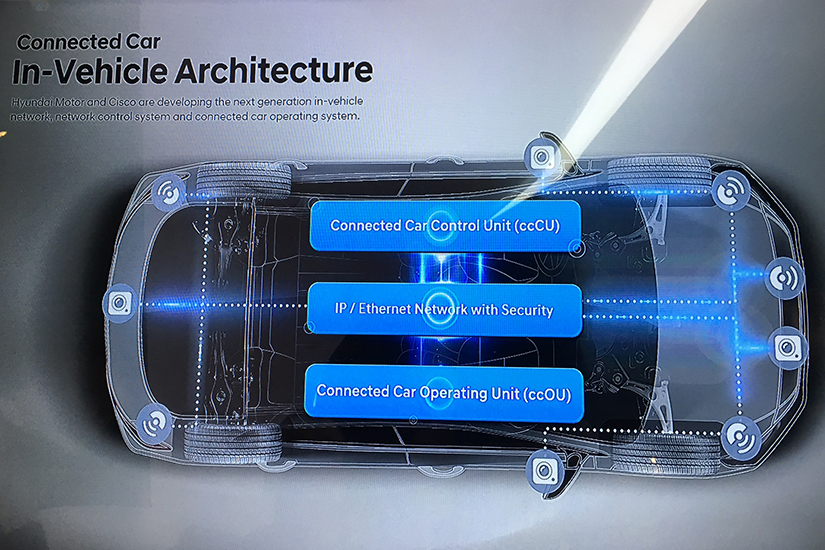 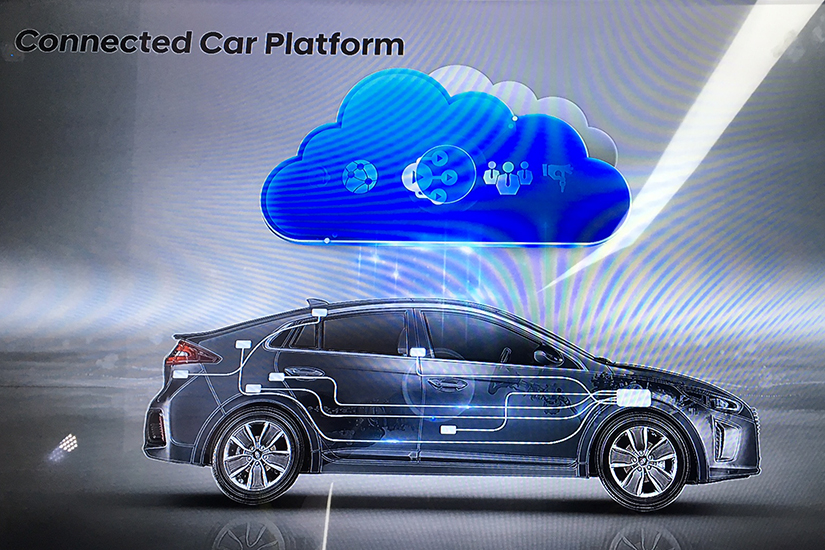 The level of intelligence on display at CES2017 is being made possible because the concept of the “network” is being redefined. Carriers, software and hardware are coming close together, providing higher speed services, lower latency and greater capacity. necessary for. In this new age of adaptive automation, increasingly intelligent systems need to connect to more diverse objects and use digital assistants to glue all things together.

The Consumer Technology Association (CTA) estimates that global smart home market is worth 25 billion an expected to grow 63%. We are already seeing the spill-over to corporate sectors in terms of intelligent environments. Now wearables appears to be the next rapidly growing market, expected to reach 48 million devices in 2017, indicating a doubling over five years. CES 2017 has over 250 wearable exhibitors, and the products are going beyond the wrist and health monitoring. The fragmenting of consumer electronics into niche solutions, where even low percentages of market share provides a viable market is a strong indicator that wearables will soon reach the corporate environment. Additionally, when CTA looks at the global market, there is strong indication that every area of the world, even those with economies that are expected to continue to struggle with buying power is likely to adopt wearable technology. The term “Bring your own device” to work will soon include watches and clothing that interacts in a business setting. After all, it’s in the office meetings that heartrates tend to increase. Wearable technology will deliver value by increasing employee productivity. 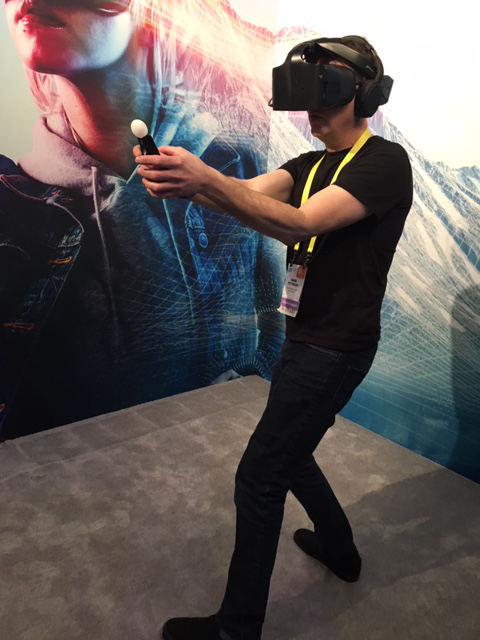 The future of entertainment was most impressively demonstrated by Intel’s investment in Virtual Reality (VR) products, and questions about how this technology will impact corporate environment are being answered. VR requires very fast processors and massive amount of data transfer. Intel demonstrated the first ten nanometer processor at the show. So, even if VR itself never comes to your office, the hardware and services necessary to deliver the experience will be available for your corporate applications.

Virtual Reality is seeing a 79% increase in sales, 2.5 million units and 660 million in revenue, which is up 43% according to the Consumer Technology Association. The market is starting to take hold, as VR computers start to push below the 1K threshold, and headset products like Intel’s and Lenovo’s do not require a tether to a PC. CTA predicts that we are going to see greater investment in content and advertisement. The experience is changing from shifting in time to shifting in place.

Today’s VR content creates a massive amount of data. Intel’s 360 Replay service, which immerses consumers into live sporting events uses 38 cameras and generates 2 terabits per minute. The VR experience is crossing over into travel. Now users can walk around the environment. The video moves with you as you travel through space. Intel calls this volume-metric video technology. Every single pixel is mapped in space. Every frame is 3G per frame.

How can work be changed by VR?  For years, people have performed dangerous work tasks, and companies look for innovative ways that technology can eliminate risk. Intel demonstrated how VR can assist in the inspection of solar panel farm located in a dessert. It would be very risky and time consuming for a person to do this, but combined with the output of drone flying overhead, the task becomes much faster and safer. Additionally, easy to increase productivity by adding more headsets. The users are all engaged in the same VR experience, but searching in different directions. 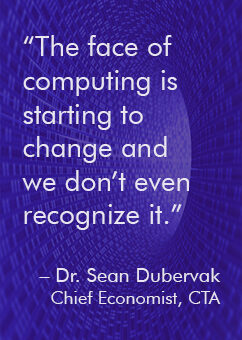 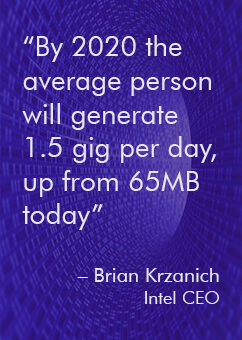